Outer Wilds is a space exploration game where you launch your tiny rocket and explore various planets to uncover the mysteries of the galaxy. The game has a remarkable physics engine where flying in space with an astronaut suit or the ship feels kinesthetically pleasing. Above all, the game is artistic and meaningful with its overall message and gameplay. It nails its theme of discovery and exploration by giving the player all the tools upfront and not guiding the player in their journey which is a rarity. Although the game is not for everyone specially who are susceptible to motion sickness, this game deserves to be played and experienced.

While the game is primarily about the joy of space exploration, the game resonated with me differently. During my first playthrough, I launched into space and delightfully agonized which planet to explore. Little did I know, I first choose and crashed into the sea of the green planet, Giant's Deep, then trying to find safety in land among the strong cyclones and ocean currents. Wherever I escaped to next after some time exploring, I heard an audio cue that lasted for a minute; then, the Sun collapsed onto itself and transformed to a bright blue supernova slowly consuming everything. I stood fixated in awe, took a deep breath and kept my eyes open. 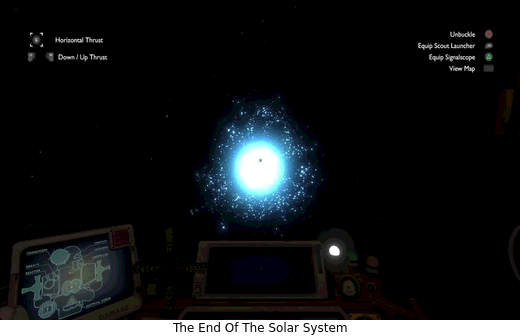 Death did not take me but was instead sent back in time right after the start of the game. Why did the Sun explode? Why is the player sent back in time when it does? Can this supernova be stopped or the home planet saved? While the player is free to roam the galaxy, the Sun's time limit forces numerous and unavoidable deaths which is heightened through the first person view/experience. Over time, the player accepts death as a natural part of the game, not simply an error/failure state that they need to respawn or reload state.

While most players will solve this unpleasant mystery in the hopes of saving the galaxy, perhaps the opposite is also a valid response. Death should instinctively be avoided; however, the game with its technical and spatial boundary does not let the player run away. It forces the player to face it, yet it is not a painful experience. Neither a tragedy nor conflict but the natural end of the solar system. To behold that beautiful and radiant moment feels both religious and peaceful.

All this emotion was drawn out in the first loop, such a game is a rare and personal gem. Whether players or readers felt differently, this game not just invokes the fear of death, but also its acceptance through its story and message that I want to discuss. To be clear, life and time is precious and being more open to its end is a valuable insight.

To answer why the Sun is dying, the alien technology and knowledge left behind the precursor race, Nomai, may lead to it. Indeed, our newly graduated Heartian astronaut protagonist is the only one equipped to translate their language and thus understand their legacy. As the player uncovers more about them and Ash Twin Project, it is found the Nomai does not have a clear answer themselves. While other Nomai clans exists, the ones that found themselves in the Hearthian galaxy followed a signal older than universe itself known as Eye of the Universe. The incidental time loop and surviving technology were all in service of finding this elusive origin. Even if the player discovers a way to travel to it which is intended endpoint of the game, the player is no closer to stopping the threat. In fact, the Nomai would escape themselves and leave the danger behind once they found the coordinates. Although the Nomai tried and failed to force the Sun to explode as a power source, the Sun is simply at the end of its life.

If the Nomai do not have answers or powers to avert the crisis, what then can stop the death of a solar system? Should the player place their hope in the unknown Eye of the Universe can offer? Rather, if something is naturally meant to die, do we have the right to prevent it from doing so? The Sun is dying and the Hearthians should have been evacuated if there was more time. The Sun will die, the Hearthians will follow and so will the player character. One could read despair and defeat, but perhaps the game is about accepting the inevitable or that not all things can be saved. 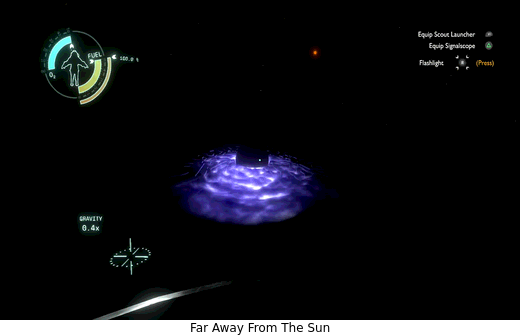 As a final hope, when the player arrives at Eye of the Universe, the Sun is far beyond the stars and possibly beyond danger. Inside however, it is revealed that other solar systems or galaxies are dying indicating the death of the universe, not just of the player's solar system. At the end of the universe, the game lets the player sit by a campfire and listen to the main theme as the new universe comes into light. To emphasize, although the solar system collapses and the player dies which contradicts the expectation of a lone hero or survivor, the universe and life will eventually find a way. Death is not the end. 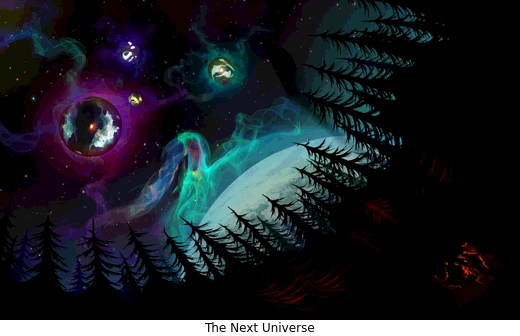 In light of the ending, the signal that is older than the universe or the Eye of the Universe itself becomes interesting. The universe has been possibly recreated several times and each time an observer sent waves of harmony for the succeeding generation to remember and ultimately find as the Nomai and Hearthian did together. If so and one thinks of the time loop as a hindrance to one's personal or emotional well-being, then it could be read as overcoming depression, anxiety, pain, suffering and so on. As a personal reading, inescapable and perpetual deaths tap into my anxieties and stopping the loop is overcoming it; finishing the game becomes a therapeutic experience.

Related to that is Gabbro who is the most relaxed Outer Wilds Venture member and more importantly also experiences the time loop like the protagonist. Unlike the expected player, he is at peace with the impending doom and even teaches the player to meditate through it which is represented by the Meditate Until Next Loop option in the pause screen. Happily surrendering to the next loop seems to be a form of suicide without this option. If one needed to end the loop prematurely, suicide by suffocating or crashing seems a viable strategy. With this option however, it is not framed as such but instead as a calm acceptance. Like with the other members though, he does not act on it and lounges around making his peace as a lazy surrender than an enlightenment. Still, his relaxed demeanor and personality contrasts the player's anxieties. 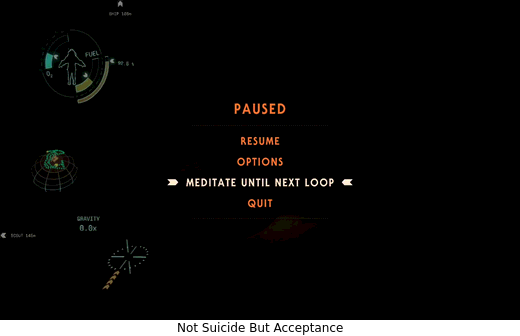 Between the Hearthian explorers and Nomai thinkers, by making the player embody the travelers spirit in this time loop, the focus shifts on exploring the world for an answer than inventing one. Given the short duration of the loop, knowledge and experience may seem futile but each bit in each iteration add up. For a Hearthian specially, each loop is a journey, each journey a precious experience. One last slight reach for the ending, it is the Nomai who are thankful for the journey while playing around a campfire as the new universe comes to life. If the Nomai knew Eye of the Universe would lead them to the end, would they have been so obsessed in chasing it across the stars? As an Hearthian, the journey to the end of the world is romantic.

The strongest support for the theme comes with the loop itself. Making the loop a repeated short cycle instead of a looming deadline is a brilliant decision for the feeling and message. If it were a long deadline or cycle, the feel and weight of death diminishes the longer it looms in the distance. By being constantly reminded of the destruction and impact of the end, it feels closer and personal how much it holds the player. By making sure the player experiences it once, the white explosion at the end contextualizes the Sun's nova. In changing the scope and scale, as the loop ends for the player, a new loop begins for the universe. 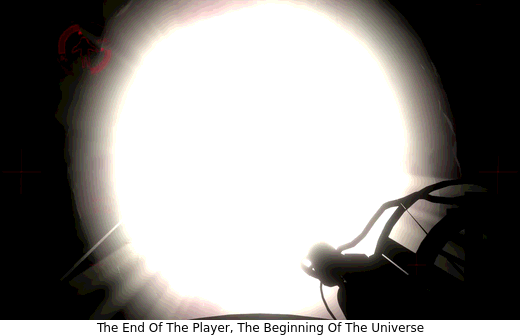 In simple ways, it is amazing how naturally this game taps into anxieties of death. Other points can be made about the game such as the physics, ships, planets, Nomai race, Hearthian explorer, instruments, quantum objects, ethics and so on; but above all through its restraint and commitment, it was able to deliver a meaningful and positive experience for me and hopefully other players as well. What more can you ask of a game?